It’s time for another look at two of the great employees at Sardella’s Pizza. We’re very lucky to have these gentlemen working for us and helping to bring great pizza to the Valley, and we wanted to let them know how much we appreciate them.

Let’s get to know Ryan and Robby a little more! 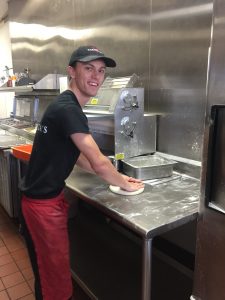 A native of Phoenix, Ryan’s been working at our store on 83rd Avenue and Lake Pleasant Parkway for the last two years. When asked why he wanted to work for us, he indicated that he needed to get a job and Sardella’s offered a “fun and unique” opportunity. You bet we do!

He describes himself as happy, hard-working, and sarcastic. We can certainly believe the hard-working part! When he’s not in the kitchen making up pizzas, he works a second job at a body shop, painting custom cars.

Of course, it’s not all work and no play. Ryan also enjoys painting and drawing, as well as playing video games. Being a Phoenix native, he likes that the weather is pretty consistent and that his friends are close by.

His favorite pizza is a Buffalo Chicken pizza, customized with bacon and extra garlic. Sounds like a tasty combination for everyone to check out! 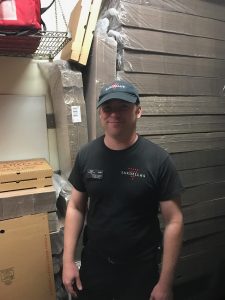 Robby originally hails from Pennsylvania. He’s been a delivery driver for the last seven years, operating out of our store on 19th Avenue and Union Hills.

Much like Ryan, Robby needed to find work. Luckily for him, he knew somebody who already worked at Sardella’s Pizza and they recommended him. It helps that Robby likes pizza, particularly a good pepperoni and bacon pie. “It just makes sense!” he says.

He describes himself as simple and relatively easygoing, but also very critical of himself. When he’s not delivering pizza, he can sometimes be found racking up a game of pool or heading out of town to enjoy nature.

Robby points out, “Everything you could possibly need is in such close proximity. You don’t have to travel very far.” If he’s at home, he enjoys watching movies and playing video games, as well as assembling complex Lego sets. You think we could get a model of the store?

It is guys like Ryan and Robby that continue to make Sardella’s Pizza a community favorite for more than 20 years. Whether you’re dining in or getting our delicious food delivered from any of our four locations in the Valley, we hope you’ll enjoy our award winning pizzas, pasta and hot wings!